FOR IMMEDIATE RELEASE
May 3, 2018
THREE MONTICELLO STUDENT-ATHLETES COMMIT TO COLLEGES/UNIVERSITIES, 12 FROM CLASS OF 2018 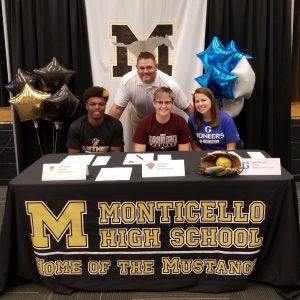 Jerrick Ayers, Football – Ferrum College
Jerrick finished his high school football career as the 7th all-time rushing leader in Monticello football history. In his career, he ran for 2,318 yards on 345 carries, an impressive average of 6.72 yards per carry, and scored 35 touchdowns.  As a senior, Jerrick was selected 1st team all-Jefferson District and 1st team all-Region.  As a senior, Jerrick rushed for 1270 yards, scoring 18 touchdowns, along with five receptions for 203 yards – and on four of his five catches, he scored touchdowns.  In his final home game, against Waynesboro in the first round of the playoffs this past season, Jerrick had perhaps his best game of his career rushing for 206 yards on 19 carries with two touchdowns and helped lead an offense that scored the third most points per game (42.5) in Mustangs’ football history.  A multi-talented student-athlete, Jerrick has attained all-Region honors as a sprinter on the Indoor and Outdoor track teams, and will compete in his final Regional Track Championship meet right here at Monticello on May 23.

“Over the past four years I have had the pleasure of watching Jerrick grow from a quiet ninth grader into a vocal, hardworking young man.  Whether it is on the football field or the track, Jerrick leads by example.  The first to show up, the last to leave, and pushing his teammates throughout.  Jerrick excels in anything he sets his mind to and I wish him the best of luck.” – William Trent, Assistant Football & Assistant Track Coach

“Ava has been a fantastic leader and captain of the team her Senior season, and a very hard worker and spirited competitor all four years of her time with us.  She has always risen to the occasion, whether it be anchoring our relays in big meets or racing fast individually in championship meets.  I have no doubt that the competitive fire and drive for success she has demonstrated all four years here will serve her and her team very well at Roanoke.” – Greg Remaly, Head Swim Coach

Jessica Williams, Softball – Glenville State College
Jessica is one of three senior captains on Monticello’s softball team, and is a leader on the field as well – with a .314 batting average along with 2 home runs, 11 runs scored and 11 runs batted in thus far in her senior season, along with an .846 fielding percentage from her position at 3rd base.  Last season as a junior, Jessica was third on her team in batting average with a .326 average with 11 runs and 8 runs batted in.  She was named all-Conference as a junior, in a season highlighted by Jessica’s walk-off hit vs. Albemarle to lift her team to a 6-5 win.  A multi-sport student-athlete, Jessica was a member of the varsity basketball team for three years, and was the team captain as a senior.

“Jessica works extremely hard each day, she is willing to do whatever it takes to help the team. It has been a joy to watch her grow as a player and young lady. She is a true joy to coach.” – Beth Humphrey, Head Softball Coach.

Including today’s ceremonial signings, twelve (12) members of Monticello High School’s Class of 2018 have committed to continue their careers as student-athletes at the college level.