FOR IMMEDIATE RELEASE
February 6, 2019
THREE MONTICELLO STUDENT-ATHLETES COMMIT TO COLLEGES/UNIVERSITIES, 5 FROM CLASS OF 2019

Chase Emmert, Football – Centre College
Chase transferred to Monticello from St. Annes-Belfield prior to this school year, quarterbacking the Mustangs defense from the safety position after starting at quarterback for STAB prior to the transfer.  During his senior season, Chase totaled 60 tackles including five (5) tackles for a loss, three (3) interceptions, and eight (8) pass breakups.  As the starting quarterback for STAB, Chase totaled 1,700 yards as a junior, including 28 total touchdowns to go with 40 tackles and two (2) interceptions on defense.

“Chase transferred to us from STAB hoping that he would continue to play quarterback here.  When that didn’t happen, he never complained one time. That doesn’t usually happen, and he ended up being our best defensive back.  He had a great year for us, is one of the best team kids I have ever coached, and will be a very good safety this fall at Centre.  He has worked to get bigger and stronger, and was a pleasure to coach.  He is a very good player but an even better young man with impeccable character and leadership.  I just wish we had him for more than one year.”
– Jeff Lloyd, Head Football Coach

Bailey LaPrade, Mountain Biking – Lees-McRae College
Bailey is a founding member of Monticello’s Mountain Bike program, the first public high school mountain bike program in the state of Virginia starting in the fall of 2015.  During her junior year, Bailey ranked first in the state Virginia Interscholastic Cycling League rankings in the JV Girls division.  Having competed in 36 races over the course of her four years with the spring of her senior season still to come, Bailey was the top female cyclist in three of the four VICL races last fall, finishing second in the one race she didn’t win!  Bailey shared that Mountain Biking at Monticello High School changed her life and changed it for the better as she joins the Emergency Medical Services and Management School at Lees-McRae.

“Bailey has been a dedicated teammate, showing up to all practices ready to work and ready to learn. She’s been a role model for our younger team members and after a great junior season, she moved up to varsity where there is significantly stronger competition.  She continues to be our number one or two highest point earner at every race.  Quite simply stated, the Monticello Mountain Bike team wouldn’t be where we are today without Bailey’s contributions.  We are so thrilled to see her graduate and move on to ride for Lees-McRae.”
– Sam Lindblom, Head Mountain Bike Coach

Andrew Watson, Tennis – University of Mary Washington
Andrew will become the second student in Monticello High School’s 20-year history to continue his career in tennis at the collegiate level.  With his senior season as a Mustang still to come, Andrew finished his junior season 13-6 overall as the #1 seed, competing against the opponent’s best player every match.  After his junior high school season, Andrew went on to place in the top four (4) in the Virginia state clay court and state hard court championships, with an individual ranking in the Top 50 in the USTA Mid-Atlantic Region for the Class of 2019.

“Andrew is the kind of student-athlete that coaches talk about for years after graduation.  Does he have loads of talent? Sure. Does he work harder than almost everyone else, so that not a bit of that talent is wasted?  He does, day in and day out.  The thing about Andrew is that he’s earned the respect of his teammates, his coaches, his teachers, his friends, and even his opponents because he never gives it less than his best.  Every player on our team has heard him shouting encouragement, has had him give friendly advice when they’re down, and as to suffer through a few too many of his dry, but super-cool, jokes.  He’s going to do them proud at Mary Washington as a player, a student, and most of all as a fine young man.”
– Dr. Paul Shepherd, Head Tennis Coach

Including today’s ceremonial signings, five (5) members of Monticello High School’s Class of 2019 have committed to continue their careers as student-athletes at the college level.

For a complete listing of former Monticello student-athletes who continued their careers at the collegiate level, please visit https://monticellomustangs.org/mustangs-in-college/. 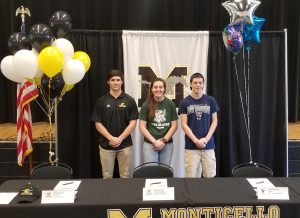 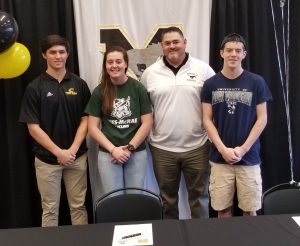