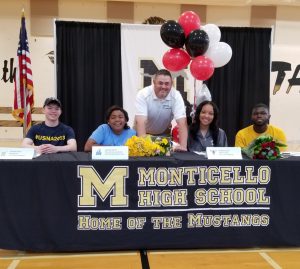 Cardale Emmery, Football – Methodist University
Cardale played two years in the football program at Monticello, primarily on Special Teams while performing in a reserve role on the Offensive Line and at Defensive End and Linebacker.  With Cardale a part of the Special Teams unit, Monticello’s punt team and kickoff teams set school records in several Special Teams categories.

“I am very happy for Cardale and his family to see him continue his education and get a chance to continue playing football. He is truly a team player and puts the team and its success before himself.  He added depth to our roster and was an important part of our special teams. I wish him and his family the very best.”
– Jeff Lloyd, Head Football Coach

Tianna Kinlaw, Track & Field – University of Lynchburg
Tianna has competed in Track & Field for four years for the Mustangs, including two years as team captain.  Her major events are the high jump, long jump and the 4x100m relay.  Tianna represented Monticello in the Region 3C Championship meet in 2017 and 2018 in the long jump and high jump, and competed in the VHSL Class 3 State Championship meet in the high jump in 2017 and the 4x100m relay in 2018.  A multi-sport student-athlete, Tianna also played four years of basketball for the Mustangs, earning 2nd team all-Jefferson District honors as a junior.

“Tianna was an important member of the team and a great role model for the younger players following behind her.”
– Juwuhn Smith, Head Girls Basketball Coach

Arianna Nixon, Field Hockey/Lacrosse – Eastern Mennonite University
Arianna, a multi-sport student-athlete for Monticello as a goalkeeper on both the Field Hockey and Lacrosse teams, plans to continue competing in two sports at EMU.  In Field Hockey, Arianna had 78 saves last fall including four shutouts and two overtime shoot-out wins.  Her efforts garnered her all-Jefferson District and all-Region Honorable Mention honors, and her efforts helped lead the Mustangs Field Hockey team to the VHSL state tournament for the first time since 2006.  In lacrosse, Arianna totaled 18 saves and 2 ground balls as a junior and has 15 saves so far this spring, including the win as starting goalie in Monticello’s home victory over Albemarle just two nights ago.

“She is someone who always provides the team with encouragement and positivity, and never fails to make us smile. She never fails to impress me. I am both honored and proud to have had the opportunity to coach Arianna – she is a kind, selfless and hardworking young woman.
– Gwendolyn Apgar, Head Field Hockey Coach

“If you don’t have an Arianna on your team, you are at a serious disadvantage. People like Arianna are the reason that there is still ‘goodness’ on the field and in the world. No matter what the task is, she is up to the challenge and she will do it with a smile on her face. Eastern Mennonite is lucky to have Arianna and we are sad to see her go.”
– Langley Sloan, Head Girls Lacrosse Coach

Jackson Perry, Wrestling – United States Naval Academy
Jackson competed as a member of the varsity wrestling team at Monticello for three years.  He was a two-year team captain, a regional place winner and a VHSL state tournament qualifier.  Jackson picked up his 100th career win during his senior season and had a career record of 111-24.  He led the Mustangs in both takedowns and near-fall points during his junior and senior seasons.

“Jackson is a natural leader. He holds high standards for his teammates and helps them work to achieve those expectations.  It was a pleasure for Coach Palmer and myself to coach Jackson and we have no doubt the work ethic he has developed on the mat will carry him far in life.  We are incredibly proud that Jackson has earned and accepted his appointment to the Naval Academy and look forward to him serving our country.”
– Robbie Wendell, Associate Head Wrestling Coach