This spring, Monticello High School will offer its inaugural eSports team as part of the Virginia High School League’s (VHSL) pilot activity.  Using the PlayVS platform under the VHSL’s competitive structure, options for play include League of Legends, Rocket League, and SMITE teams.

Coaching the first Monticello eSports teams are John Skelton and Krishan Leong, along with dedicated volunteers committed to establish the VHSL eSports program at MHS.

Mustang Morning eSports meets on Fridays during Mustang Morning/Club Period in room G209 with Mr. Skelton.  eSports teams practices are in the morning before school, at 8:00am, on Monday and Wednesday in Room B103.   Starting in January, afternoon practices are planned from 4:00-6:00pm on Tuesdays and Thursdays, also in Room B103.  The first matches are scheduled for February 4th for League of Legends and February 6th for Smite and Rocket League. Detailed schedule information will be shared by the coaches with interested students. 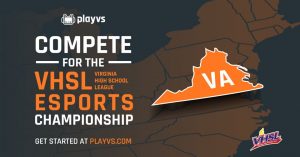